Pharmaceutical companies have not only invented and tested the first Covid 19 vaccines in less than a year, but have also set up large-scale production for them. That is why they can deliver them at all right now. While further expansion of production is still underway; it will not stop until 20 billion or more vaccine doses can be produced worldwide per year.

A steep increase in production capacity

Global Vaccine Distribution
On June 04, 2021, vfa President Han Steutel discussed with Prof. Dr. Anna Holzscheiter (University of Dresden) and Elisabeth Massute (Doctors Without Borders) ways to speed up the supply of vaccines to poorer countries in the SWR2 FORUM. Patent revocations are ineffective and also harmful to further pandemic preparedness, Steutel said.
That was also the topic of the Max Planck forum "Vaccine for All! What can be done?" on July 01, 2021, with Prof. Dr. Jochen Maas of Sanofi, among others. Prof. Dr. Reto Hilty of the Max Planck Institute for Innovation and Competition explained here how patent law must be balanced to promote new developments.

Worldwide, according to calculations of Agence France Press by early June, more than 2 billion vaccine doses against Covid-19 have already been administered. That's more than have ever been produced against any disease in six months in history. In 2019, before the pandemic, global production of vaccines against all 30 or so vaccine-preventable diseases was only 5.5 billion doses, according to WHO. Because this production had to continue during the pandemic, the Covid-19 vaccines were largely produced not by rededicating existing production facilities, but with additional production capacity set up.

Although 2 billion doses in six months is a major achievement, however, many times more Covid-19 vaccine must be produced before everyone in the world can be given the opportunity to be vaccinated.

In Germany, as in all EU countries except Hungary and Slovakia, vaccination is carried out exclusively with Covid-19 vaccines that have received EU approval via the EMA. The German government provides information on the quantities of vaccine received and the status of coronavirus vaccination in Germany on its vaccine dashboard. It shows that the amount of vaccine doses delivered per week has increased sharply compared with the first quarter of 2021. The federal government also provides information on the deliveries of vaccine doses expected in Germany.

Statement from international pharmaceutical associations on overcoming the Covid-19 pandemic

On Sept. 22, 2021, the IFPMA and four other pharmaceutical associations emphasized in a joint statement that the industry is doing all it can to contribute to global vaccine supply and the development of better therapies, while actually realizing the announced expansion of production capacity.

The original companies themselves have the greatest interest in ensuring that as much of their Covid-19 vaccines as possible can be delivered. Therefore, the companies with the most advanced Covid-19 vaccines have already since spring 2020 not only expanded their own production capacity, but also established more and more collaborations with other companies. These could or can then supply components for the vaccine or take over certain manufacturing steps in parallel with the original manufacturer after retooling their facilities and training their personnel; or they can manufacture and distribute the vaccine completely independently under license. If the original companies identify other possible partners for such collaborations, they can expand even further here.

The life science analytics company Airfinity expects to produce more than 12 billion doses of Covid-19 vaccine in 2021, with even greater production capacity available next year.

Source: press releases from the above companies and the EMA; media reports; information provided by the companies. 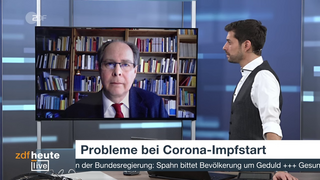 On December 6, 2021, vfa research spokesperson Dr. Rolf Hömke explained to ZDF heute live how supply volumes for COVID-19 vaccines will be expanded. Here is the original interview in German language.

Similarly, other companies have also established networks for the production of their vaccines, or have themselves granted licenses to other companies that have the necessary equipment and personnel qualified to do so. In each case, these companies receive extensive training from the original company.

On the other hand, no rapid expansion of production capacity is promised by the idea of using patent revocation and compulsory licensing to contract any other pharmaceutical company to produce the vaccines. After all, vaccine production is one of the most demanding tasks in drug manufacturing. Every detail matters to ensure that vaccines are effective and tolerable.

Vaccine production always requires intensive technical preparation. Nothing can be done on demand.»

Only with the help of the original manufacturer can another company be quickly put in a position to participate in production. Therefore, cooperations are the conclusive way to the rapid expansion of production volumes.

Several Western companies are partnering with African companies to establish their own production of Covid-19 vaccines in Africa:

The production method for the different types of vaccines already approved or in development against covid-19 differs substantially. In most cases, it also differs significantly from the production method used for the usual vaccines against other diseases recommended in Germany, which are made directly from killed or attenuated pathogens.

For example, some of the Covid-19 vaccines are based on genetically engineered spike protein from the SARS-CoV-2 virus. Physicians call them subunit vaccines. In one case, their production uses a culture of insect cells in nutrient medium that have been genetically engineered to produce the protein in question. This protein must then be purified from all remnants of the insect cells and the nutrient medium. Only then can it be processed together with an emulsion of adjuvants to produce the finished vaccine. The adjuvants serve to strengthen the immune response in the vaccinated persons. The finished vaccine is finally filled into sterile glass vials.

Vector virus vaccines are produced in a completely different way. They require large cell cultures containing mammalian cells. Biotechnical methods are used to equip these cells to produce viruses - not coronaviruses, however, but harmless vector viruses that cannot make people sick. The vector viruses are genetically modified to carry the genetic blueprint for the spike protein of the covid-19 pathogen SARS-CoV-2. This is critical for the vector viruses to provide a protective response against Covid-19 after vaccination. The vector viruses are eventually "harvested" from the cell culture. After being thoroughly but gently purified, they can be filled into glass vials in a liquid suitable for inoculation.

The production of messengerRNA (mRNA) vaccines is even different. It begins in the first step with the multiplication of bacteria, to which small ring-shaped pieces of DNA have previously been inserted by genetic engineering, in large bioreactors. The DNA rings multiply along with the bacteria. When the bacteria are then killed, they release the ring-shaped DNA pieces. These are necessary for the production of the actual mRNA. In the next step, highly pure mRNA must be produced from this mix. In a further step, this is then enclosed in liquid in submicroscopic vesicles consisting of nature-identical and artificial lipid-like molecules; these vesicles, called lipid nanoparticles, must not be too small or too large. The finished solution containing the lipid nanoparticles is then filled into glass vials.

The top priority in the development of Covid 19 vaccines from the outset was tolerability and safety. Fortunately, the very first vaccines proved to be well tolerated. However, the safety review does not end with the approval of the vaccines, but continues thereafter. How this is done is explained here.

During development, the tolerability of each vaccine was first tested in animal studies and then (if the results were good) in all subsequent clinical trials with volunteers. All Covid-19 vaccines that have been approved in the EU to date or for which EU approval is pending have shown good tolerability in this context: although many study participants experienced the usual vaccination reactions (pain at the injection site, fatigue or somewhat elevated body temperature in the initial period after vaccination, etc.), they did not experience any problematic side effects. The longest stage in covid-19 vaccine development is testing with volunteers. There is much to consider in this process. H