Germany is a good biotech location, but other countries are passing by

The road to a new drug is a long one: it often takes more than a decade from the identification of a target in the disease process and the invention of a suitable drug candidate to clinical studies, approval and production. Biotechnological methods have become indispensable and research-based biotech companies in Germany are involved in this process along the entire value creation chain. 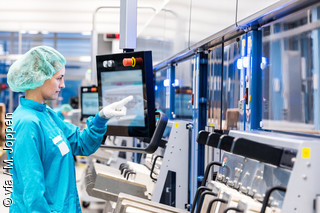 Never before has the public focus on medical biotechnology companies been as strong as since the beginning of the Covid 19 pandemic. Innovative diagnostics, therapies and vaccines for the detection, treatment and prevention of an infection with the novel coronavirus SARS-CoV-2 are urgently needed. The sector can play to its strengths in this respect, because with research expenditures of 16.2% of sales, research-based pharmaceutical and biotech companies are far ahead of other high technologies such as aerospace engineering (8.6%) or the automotive industry (7.8%). (1)

However, medical biotechnology in Germany also plays an important role in medical progress, regardless of the acute pandemic situation. In Germany, 42,300 people are employed in medical biotechnology companies that are developing products or already have products on the market. This is an increase of one and a half times over the last ten years (2009: 27,500). A similar development can be seen when looking at the pipeline - i.e. biopharmaceuticals that are currently in the development stage: Ten years ago, there were 468 projects in this country, whereas last year already 640 drug and vaccine candidates were in clinical development stages. These surveys are taken from the current Biotech Report of BCG and vfa bio. (2)

Germany is the leading European location for biopharmaceutical production

In the meantime, more production capacity is available in South Korea than in Germany. (3)

In addition, a planned health policy measure is currently endangering the production site Germany: From August 2022 onwards, biopharmaceuticals will also be automatically exchanged in pharmacies in Germany - i.e. a similar drug will be dispensed to the patient without consulting the treating physician. Due to the expected price pressure, it is to be feared that the production of such biopharmaceuticals will then increasingly be shifted abroad. The automatic substitution of biopharmaceuticals must therefore, but especially for medical reasons, be rejected.

The question of how Germany is positioned in the production of advanced therapy medicinal products (ATMP) could also be of decisive importance for the future of the location. ATMPs include gene and cell therapy medicinal products as well as tissue engineered products. Often these products are manufactured on a patient-specific basis and place high demands on production. The motto here is: "The process is the product". Germany has locational advantages in this area due to the highly qualified specialists required and the know-how available here.

Of the ten ATMPs currently approved throughout the EU, five are produced in the USA and six in Europe (one drug is produced on both continents). Germany is - still - the European leader in this field with three products, followed by Italy with two and Spain with one ATMP.

Not losing touch with innovations

In the future, those who are ahead in ATMP production will also decide which site can offer solutions to their major challenges. According to a 2019 study, this includes above all the rapid expansion of production. (4) For the clinical testing of new ATMPs, only small quantities of the drug are usually required at the development site, as only a few patients are treated with it. After approval, however, the capacities - depending on the respective therapeutic area - have to be expanded. Since this is a highly controlled process, the corridor for adjustments is very narrow. The automation of ATMP production, which makes sense for larger quantities, is still in its infancy. (5) There are good conditions in Germany for advancing this automation in cooperation with specialized research institutions and companies.

With regard to the development of new ATMPs, it is clear that Germany is in danger of losing touch with the USA and China: Among the countries in which gene therapy studies were initiated or approved in 2018, Germany is in third place, but by a large margin, because only 4.4 % of clinical gene therapy studies are carried out in this country - compared to 47.5 % in the USA and 39.2 % in China. (6)

In order to make Germany fit for the future in the ATMP area, BCG and vfa bio have proposed several concrete recommendations for action. These include the establishment of an ATMP task force of the state supervisory authorities to harmonise their requirements, the creation of networking and infrastructure in a German Centre of Health Research for ATMP, which is also yet to be established, and the establishment of Germany as an ATMP production location by training more specialist staff, expanding capacity and automating production.

Because these novel therapies in many cases offer hope for long-term relief or even cure, the importance of ATMP will also increase for patients. The goal of the research-based pharmaceutical and biotech companies is therefore clear: to open up new therapeutic options for patients and their doctors for severe and chronic diseases. Germany plays an important role as a location for research, development and production of biopharmaceuticals. However, in order to maintain and further expand this position, continuous improvements in the framework conditions are necessary so that innovative therapies can continue to be developed and produced in Germany in the future.