RNA medicines: Potential for Germany as a business location

Messenger RNA, or mRNA for short, is the name of a class of biomolecules that, following its success in Covid 19 vaccines, is believed to have great medical potential for prevention and therapy - and thus also considerable economic significance. Germany has the best chance of playing an important role in this, as many companies and research institutes in this country are already working on it. 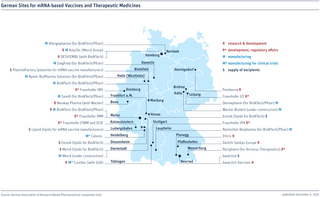 The map can also be downloaded as a png file or a pdf document.

Germany not only has companies developing mRNA vaccines and other mRNA medicines (marked F on the map), but also suppliers of essential excipients required for their production (marked Z). Other companies in this country take on a significant part of the manufacturing (P) as production partners of the inventive companies. Research institutes also contribute, especially with the further development of technologies for processing mRNA into drugs. Thus, competence in all aspects of this field of progress is found in Germany; and the paths for cooperation are short.

At the same time, the German mRNA landscape is closely networked with partners in other countries: via production cooperations, via research alliances, via the procurement of further excipients and equipment.

However, even though Germany is strong in the mRNA field, it is not the only country with expertise and resources. Also very active in this field are the USA and China, but also Belgium, UK, South Korea, Switzerland and increasingly India. Germany only has a chance to exploit its current locational advantages if it keeps its eye on the ball now!

Drugs with mRNA in development

Most projects with mRNA are still underway to develop further Covid-19 vaccines. However, companies in Germany and around the world have long been working on vaccines against other infectious diseases, including influenza, shingles, Lassa fever, Zika and Nipah. Three projects are aimed at vaccines against the Epstein-Barr virus, which causes glandular fever and is probably also a contributory cause of multiple sclerosis. Companies are also developing mRNA-based vaccine candidates against HIV, malaria and tuberculosis - three diseases against which vaccine projects have repeatedly failed. The vfa maintains a comprehensive list of mRNA vaccines in development.

Novel therapeutic drugs using mRNA are being developed against, among other things, cancers and metabolic disorders that are difficult to treat, such as cystic fibrosis. For many patients, this could provide effective treatment for the first time. The consulting firm Boston Consulting Group estimates that the first international approvals for therapeutic mRNA drugs could be available from 2025.

Projects for drugs with other types of RNA

If one extends the research even further to include projects involving any form of RNA-based drug, more players show up on the German map. Instead of mRNA - which enables cells to produce additional proteins - they use, for example, forms of RNA that block the formation of certain proteins or other substances (so-called antisense RNA or RNAi). Still others make aptamers from RNA, molecules that can attach to certain other molecules in a similar way to antibodies to hinder their activity.

The technologies needed to do this are not the same in every respect (for example, some of the RNAs used here are synthesized chemically without any bioengineering). But in many places, know-how can be transferred from one type of RNA-based drug to another.

Where there is development or production activity in Germany on RNA-based drugs of any type is shown in the following map: 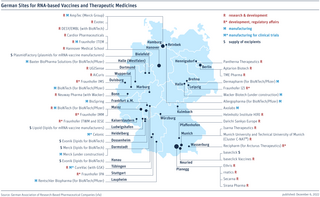 The map can also be downloaded as a png file or as a pdf document.