How the COVAX Facility works for global access to Covid vaccines

With the goal of ensuring that countries have the best possible access to COVID-19 vaccines, regardless of their purchasing power, the World Health Organization (WHO) and partner organizations launched the COVAX initiative and its COVAX Facility in April 2020. COVAX stands for "Covid-19 Vaccines Global Access". The main role of the COVAX Facility is to order vaccine doses from manufacturers and allocate them to all countries that have declared their participation in COVAX. These are in Africa, Asia, Oceania, South America and Europe.

COVAX has delivered more than 188 million doses of Covid-19 vaccine to 138 countries and regions to date (as of Aug. 6, 2021). This is shown in the Live Ticker from Gavi. 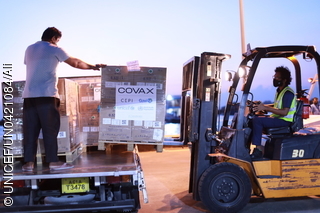 At least two billionquality-assured and needs-based vaccine doses should be ready by the end of 2021 to end the acute phase of the pandemic, according to COVAX's stated goal. Poorer countries are expected to receive at least 1.8 billion of these vaccine doses to protect at least some of their populations by early 2022. Behind this is the idea of solidarity and the conviction that, in a closely interconnected world, the Covid 19 pandemic can only be contained if all regions are adequately protected.

Operated by WHO together with the private-public vaccine alliances Gavi (Global Alliance for Vaccines and Immunizations, lead) and CEPI (Coalition for Epidemic Preparedness Innovations) and also in partnership with UNICEF, the United Nations Children's Fund. As a "vaccine pillar," COVAX and COVAX Facility are part of the umbrella organization Access to COVID-19 tools (ACT). ACT is also responsible for diagnostics, medicines, and health systems strengthening. In their report "ACT now, ACT together" released April 23, ACT initiators take stock of the situation.

One year after the launch of ACT, world leaders face a choice: invest in saving lives by addressing the cause of the pandemic everywhere and now, or continue to spend trillions on the consequences with no end in sight.»

There are now 192 countries participating in COVAX out of a total of about 200 worldwide, including 100 wealthier countries and 92 low- and middle-income countries.

When wealthier nations purchase vaccines through the COVAX Facility, they pay the full price negotiated with vaccine manufacturers. Given the uncertain outcome of vaccine trials, COVAX provides richer countries with an additional safeguard alongside their bilateral contracts with pharmaceutical companies. Poorer countries are asked to contribute financially, but if they are unable to do so, they are entitled to free supplies. Many wealthier countries choose not to be supplied by COVAX. They do, however, financially support procurement for poorer countries or donate purchased quotas. Against this background, COVAX can be described as a purchasing community and an insurance company, but also as an aid community.

A significant portion of the vaccine donations involve resources from bilateral contracts that many wealthy nations have with vaccine manufacturers-in lieu of or in addition to ordering from COVAX.

Financial assistance from many quarters

To help COVAX achieve its goals, quite a few nations and communities of nations pledged well above average millions in support at international summits. At the G7 digital summit on Feb. 19, 2021, for example, the EU announced it would increase its support for the COVAX Facility to 1 billion euros, after initially pledging 500 million euros. Germany announced an additional 980 million euros for COVAX at that summit and added another 100 million euros on May 22, 2021. With a total contribution of more than two billion euros, this makes Germany one of the initiative's biggest supporters.

I thank the United States, Germany, the European Commission, the European Investment Bank, Japan and Canada for their significant funding commitments. Today's news shows us that solidarity wins out.»

While China has been a member of the COVAX Facility since October 2020, the USA did not join until after President Joe Biden took office in January 2021. The USA will support COVAX, as Biden announced at the virtual G7 summit, with an expected total of $4 billion in 2021 and 2022.

To accelerate vaccine delivery to poorer countries, the U.S. and vaccine alliance Gavi launched a global campaign to raise an additional $2 billion on April 15, 2021. At the virtual launch event, numerous governments, as well as international foundations and commercial enterprises, made pledges worth nearly $400 million.

At the subsequent Gavi COVAX AMC "One World Protected" Summit in Japan on June 2, 2021, the campaign raised an additional $2.4 billion from more than 20 donor nations, bringing the total to $9.6 billion. With these funds, the COVAX AMC can secure 1.8 billion fully subsidized doses for delivery to low-income countries in 2021 and early 2022.

Through its "Go Give One" campaign, the WHO Foundation has been calling on helpful people around the world to donate $7 since May 18, 2021. This could finance one more vaccination dose in poorer countries, according to a press release from the foundation. It wants to win 50 million supporters. In Germany, Unicef is appealing to citizens' willingness to donate.

Appeals for vaccine donations are also bearing fruit. For example, Germany is giving up all vaccine supplies from British manufacturer AstraZeneca to COVAX until further notice, the Federal Ministry of Health (BMG) announced on August 4, 2021. In a first step, 1.3 million doses of the vaccine will be delivered directly to COVAX without a detour via Germany. In addition, according to information from the BMG, Germany will forgo vaccine supplies from Johnson & Johnson in August 2021 for the benefit of other EU member states. The Cabinet had decided in early July to dispense at least 30 million doses of vaccine to developing countries and others by the end of the year. Of these, 80 percent are to be provided to COVAX and 20 percent are to go directly to other countries.

The U.S. announced shortly before the June 11-13 G7 summit in Cornwall, UK, that it would cover the cost of supplying 500 million doses of BioNTech/Pfizer vaccine to COVAX. 200 million of these doses are to be delivered before the end of 2021, with 300 million to be delivered in the first half of 2022. UK also announced on 10/06/2021 to donate 100 million doses of vaccine in 2022 in addition to its previous commitment, 80 million of which will go to COVAX and the rest directly to countries in need.

In the final declaration of the G7 summit the participating countries committed to donate 870 million vaccine doses to COVAX. At least half of these are to be delivered before the end of 2021, with the remainder in 2022. In addition, the seven heads of state and government reaffirmed their support for COVAX. German Chancellor Angela Merkel spoke at the summit of a total of 2.3 billion vaccine doses that G7 countries want to distribute to poorer countries by the end of 2022. In the process, she said, Germany is financing some 350 million doses, primarily through COVAX. International organizations such as the WHO and the United Nations, as well as aid agencies such as AMREF Health Africa, welcomed the announcements but called for larger and faster deliveries. COVAX is currently trying to secure as many doses as possible to overcome growing shortages. In the third quarter of 2021, a particularly large gap looms between expected supplies and what countries could actually vaccinate, according to WHO.

The EU plans to donate at least 100 million vaccine doses to COVAX by the end of 2021 from quotas already ordered. This was announced by Commission President Ursula von der Leyen at the G20 health summit in Rome on May 21, 2021. Germany will take over 30 million doses of this, according to German Chancellor Angela Merkel.

The United Arab Emirates (UAE) announced at the "Global Citizen's Vax Live Concert" benefit concert in London on May 8, 2021, that it will donate 1 million vaccine doses to low-income countries through COVAX. The UAE also pledged to distribute 25 million vaccine doses worldwide through its global supply chain in support of COVAX.

Substantial donation pledges have also come from many other countries, as well as commercial enterprises and foundations, including Croatia, New Zealand, Norway, Sweden and Spain, since the spring of 2021.

Never before in history has there been such a large and complex vaccine rollout as in the COVID-19 pandemic. To ensure fair coverage for all participating countries, the COVAX Facility developed different approaches: 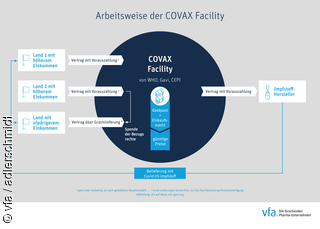 Downloads: PNG |
Graphic is released for news coverage with attribution "Figure: vfa" at no cost; no use for promotional material. 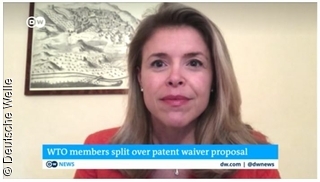 By August 06, 2021, COVAX has delivered more than 188 million doses. Of the 138 countries and regions reached, about three-quarters are among the 92 lower-income countries. They are receiving vaccines funded through the Gavi COVAX Advance Market Commitment (AMC). COVAX expects all countries that have requested vaccines to receive shipments in the first half of 2021.

As announced on January 14, 2021, the African Union has secured 270 million doses of vaccine for its member countries in bilateral contracts with manufacturers BioNTech/Pfizer, Janssen (Johnson & Johnson) and AstraZeneca via Serum Institute of India.

This is encouraging progress, but the amount of doses distributed via COVAX is still relatively small. One of our main priorities now is to increase the ambition of COVAX to help all countries end the pandemic.»

Vaccine manufacturers working with the COVAX Facility will be enabled to rapidly and extensively expand their production capacity through upfront purchase commitments and advance payments. The COVAX Facility is providing billions of dollars for this purpose. The pre-purchase commitments will specify supply volumes, delivery dates, and prices, with the COVAX Facility seeking to negotiate prices that are at most on par with bilateral supply contracts with individual countries. How vaccine supplies are allocated to participating countries and are to be used are governed by WHO guidelines.


In an agreement published together with the Bill & Melinda Gates Foundation on Sept. 30, 2020, 16 leading pharmaceutical companies pledged to support global initiatives such as COVAX and to offer their innovations worldwide at affordable prices.
As early as the turn of 2020/21, COVAX has contractually secured access to at least two billion vaccine doses. As of July 12, 2021, the portfolio includes eleven vaccines and vaccine candidates. The targeted two billion doses of vaccine by early 2022 refers to agreements between COVAX and the following manufacturers (in alphabetical order), among others:


In addition, COVAX has secured a right of first refusal on additional vaccine doses. It will take effect when vaccines currently in development with COVAX funds receive regulatory approval.

Manufacturers of licensed covid-19 vaccines continue to expand production capacity - partly in their own plants and partly with the help of production partners and licensees.

Huge expansion of production capacity Global vaccine distribution and the role of patents In a guest article in the ÄrzteZeitung of Feb. 23rd, 2022, vfa President Han Steutel explains how global vaccine distribution can be improved. For him, patent revocations are not suitable for this purpose. The topic is also discussed in a report by Deutschlandfunk radio on July 1st, 2022, for which vfa research spokesman Dr. Rolf Hömke was interviewed, among others. The topic was already comprehensively discussed on on July 1st, 2021 in the Max Planck Forum "Vaccine for all! What can be done?"was discussed, among others with Prof. Dr. Jochen Maas from Sanofi. Here, Prof. Dr. Reto Hilty of the Max P