Falsified medicines are a risk for users even if, so far, the cases where they have entered the regular drug supply chain are few and far between. This is, to a large extent, due to a panoply of measures that have been put in place to protect consumers against falsifications. But in order to better safeguard the legal supply chain from such risks, an IT-based protection system has been installed recently throughout the EU with the help of which the authenticity of prescription drugs can be checked one more time before they are dispensed to patients. The German part of this system has been established by securPharm, an organisation funded by associations representing the pharmaceutical industry (vfa [German Association of Research-based Pharmaceutical Companies], BPI [Federal Association of the Pharmaceutical Industry], BAH [German Medicines Manufacturers' Association]), pharmaceutical wholesalers (PHAGRO) and pharmacists (ABDA).

The system is active since 9 February 2019. From that day onwards it is mandatory that only packs of prescription medicines bearing the additional safety features required for the verification system leave the manufacturers' production lines. During the current transition period, pharmacies sell both old and new pharmaceutical sales packs until the packages produced before that date are sold out or have reached their date of expiry, as intended by the legislator. However, with the passing of each month, the protective shield is getting stronger.

A connecting IT system (the EU hub) ensures that the securPharm system is linked to the respective national safeguarding systems of the other EU countries. This ensures Europe-wide protection that initially includes 26 EU countries (including UK), Norway, Iceland and Liechtenstein. By 2025 the systems in Italy and Greece will have joined. Switzerland will also join soon.

There are a few special cases: Some prescription medicines are exempt from the rules, i.e. the packs do not need to contain the pack number and tamper-evident features. These are homeopathy medicines, cannabis, allergen extracts, contrast agents, medical gases, radionuclides, solutions for parenteral nutrition and eight other small product groups. On the other hand, whilst being non-prescription, certain stomach drugs must also feature the identifiers. The drug authorities may, over time, change the list of medicines for which tamper-evident features are mandatory.

How the system works

As part of the EU safeguarding system, pharmaceutical manufacturers affix a unique identifier to each pack of a prescription medicine. It is applied to the pack in clear text and in the form of a square data matrix code. All allocated numbers are uploaded by the producers to a protected producers' data base within the securPharm system (operated in Germany by ACS PharmaProtect). Later, at the pharmacy, prior to the pack being dispensed to the patient, the pack number is scanned and checked against the producers' data base. If the pack number is correct and checked for the first time, the system is going to "green-light" the process, i.e. the pack can be sold to the patient. In the case of an alert (number has not been allocated, has been scanned for another pack, is registered as stolen, etc.) the patient receives another pack of the same medication; the pack that could not be authenticated will be retained and the case will be investigated: there will be a search for handling errors and, if they turn out not to have been the cause, any suspected falsification will be looked into.

Apart from all manufacturers and pharmacies/hospital-based pharmacies, it is wholesalers and those engaged in parallel trade (exporting medicines from one EU country to another) who will be included in the EU-wide system. Wholesalers must, for example, use the system to check every pack of prescription drugs that they have not bought directly from the producer.

Based on EU legislation 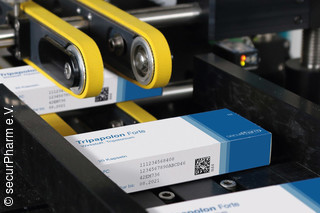 Packs featuring the Data Matrix Code (DMC) leaving the production line.
The system that is to prevent the falsification of medicines is based on the 2011 Falsified Medicines Directive (FMD) of the EU and the respective delegated regulation dated 2016. Apart from the described defence system, they also require that tamper-evident packaging must be used for prescription medicines. This way the EU is taking care of its citizens ensuring that, in the long term, they will be supplied with medicines from safe suppliers.

Patients must be sure that they are protected from falsifications whenever they buy or order medicines from legal pharmacies. Hence, the production and distribution of medicines is subject to some of the strictest controls imaginable. As of February 2019, two additional packaging features are going to make prescription drugs safer still. One of them is protection against tampering and the other individual pack numbers. The companies who are members of the vfa (German Association of Research-Based Pharmaceutical Companies) are about to change their packs accordingly.

In future, prescription medicines need packaging that cannot be opened and closed without leaving a trace. This ensures that possible manipulations of the content do not take place or are noticeable. There is, after all, the potential risk that criminals get hold of an original pack, exchange the content for falsified medicines and return it to the supply chain. Manufacturers may however even use tamper-evident packaging for non-prescription drugs. What the rules say There is no rule without an exception; this principle applies here too. Some prescription medicines are exempt from the rules, i.e. the packs do not need to feature the pack number and a tamper-evident seal. These are homeop