Prize for artificial skin as an alternative to animal testing 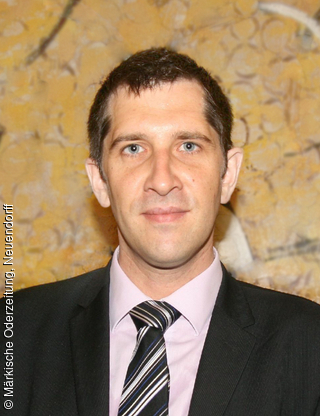 Professor Dr. Günther Weindl, pharmacologist at the Free University of BerlinThe tiny pieces of skin in the red nutrient solution are only the size of a fingernail. Yet in the future they could help to eliminate the need to test chemicals and drugs on guinea pigs and mice. For the development of his novel skin model, Professor Dr. Günther Weindl (Free University of Berlin) was awarded the Berlin Land prize to promote research methods to replace or complement animal experiments on August 09, 2013. The prize money of 15,000 euros was donated by the vfa.

The purpose of the prize is to support research projects that can reduce the future number of animal experiments. The skin model developed over about ten years by the prize winner Professor Weindl and his colleagues offers a new, promising approach to this. Weindl has been Professor of Pharmacology at the Free University of Berlin since 2011.

There have been various types of skin produced in the laboratory over the last 30 years or so but none up till now has been able to simulate all major aspects of human skin. In particular, the ability of human skin to possess immunity has been completely absent in skin models to date.

So-called Langerhans cells are found in natural skin as guardians that decide whether foreign bodies that have penetrated the skin (for instance, bacteria) or foreign substances require the immune system to kick in. If yes, they pass on a message to other immune cells to react. This leads to an inflammatory reaction in the skin, and the tolerability tests for new substances and active ingredients conducted in animal experiments are ultimately based on this evidence.

Weindl succeeded in equipping his lab-grown skin at least with rudimentary immune functions. As starting material for his considerably improved skin model, Weindl uses small skin residues from surgery, which he receives with the agreement of the patients. From these, he reconstructs the bottom and the middle of the three human skin layers and cultivates fingernail-size pieces of them in a nutrient solution. After a while, the surface corneal layer of skin forms on top by itself. Then comes the novel part - Langerhans cells isolated from blood are permanently integrated into this skin.

Weindl was able to show that they adopt the same guardian function in his pieces of skin as in normal skin. The new "immunocompetent skin model" thus offers an alternative to animal experiments when it comes to testing new substances for a potential skin-irritating effect. These tests are important in basic dermatological research and as safety tests in the preclinical development of new drugs and other chemicals.

However, some hurdles still need to be overcome before Weindl's model can become a routine test for these purposes. For example, evidence must be produced of the model's reliability and reproducibility. Likewise, ways must be found to carry out the method on a larger scale than just in small laboratory experiments. However, once that has been done, according to Weindl's estimate, several thousand animals could be saved each year in Germany alone if this method was used.

At the award ceremony in the Rote Rathaus in Berlin, Dr. Siegfried Throm, Director of Research/Development/Innovation at the German Association of Research-Based Pharmaceutical Companies (vfa) emphasized that these projects are of great importance for the pharmaceutical industry, "I hope that this award will spur on other scientists in the search for more alternative methods; because it makes it clear that this research is needed and valued, even by the pharmaceutical industry. It is a dilemma for industrial pharmaceutical researchers that they have to make use of animals in order to help humans and also other animals. But with each new reliable alternative method, there are more opportunities for reduction or refinement of further animal testing."

This is the motivation behind the vfa sponsoring the Berlin research prize for replacement or complementary methods since it was established in 2011. In addition, the vfa supports the "Foundation for the promotion of alternate and complementary methods to reduce animal experiments", which in the spirit of the 3Rs principle (Reduce, Refine, Replace) propagates a gradual replacement of animal experiments by alternative methods.

The prize winner
Professor Günther Weindl, born in 1976, studied pharmacy at Ludwigs-Maximilians-University Munich where he obtained his doctorate in 2004. Between 2005 and 2011 he worked in Tübingen and Berlin as a research scientist in dermatology and pharmacy, and in 2011 he took up a professorship at the Institute for Pharmacology at the Free University of Berlin.