In the Spotlight: Pharmaceutical expenditures

Ways to achieve health care savings are currently being discussed. Governmental policy and the health insurancers plan to create these savings primarily by way of prescription drugs. Legislative decisions should be based on facts. Here are some facts regarding prices and spending on medicines in Germany.

European drug prices in comparison: Germany in the middle

Drug prices are not uniform across all EU countries. The diversity of distribution channels and value-added tax regimes ensures that.

To get an estimate of price levels in different countries, systematic comparisons of prices across an entire product range is more meaningful than citing randomly selected individual examples. Such a systematic price comparison has been developed by the Research Institute SNF 2010 for the Norwegian Ministry of Health. This shows that drugs are not more expensive in Germany than in many other developed countries. Rather, of the countries featured in the comparison study, German prices rank in the middle, on par with the United Kingdom, Denmark and Austria. The study examined drug prices across ten European countries, using the prices of the 200 best-selling drugs in those countries. 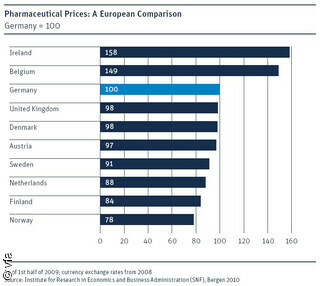 How Pharmacy prices work out: The Manufacturer only receives 57%

A major price component is the VAT. The VAT rate charged in Germany, at 19%, constitutes the third highest taxation rate of prescription drugs throughout the entire EU. Higher rates can only be found in Denmark (25%), and Ireland, for non-oral drugs (21%). Almost all other European countries, however, enjoy either reduced taxes or no tax. These countries recognize the fact that they are dealing with a particularly special kind of medical supplies, which are not comparable to upscale consumer goods.

VAT Rates for Pharmaceuticals in Europe

Overall, between taxes and discounts on the final price of medicines in German pharmacies, the tax rate in Germany was not 19%, but 24%. Other price components are the profit margins of pharmacists (15%) and wholesalers (4%), so that the manufacturer recovers only 57% of the final price.

The main output driver in healthcare... is not the drugs

A look at the expenditures of statutory health insurance in 2009 shows:
Within the overall pool of costs, drug costs rank below hospital costs, and are on a par with treatment by registered doctors. Additionally, spending increases among all other major spending sectors were clearly significantly steeper than increases for drugs. Therefore, the current largest drivers of costs are expenditures on medical care (+7.4%) and on sickness benefits (+10.5%).

The main spending units of the SHI, Issues 2009:

How can you raise meaningful efficiency reserves through drugs?

Drugs are not an end in themselves, but rather part of treatment and prevention measures for the overall health of citizens. Therefore, the various players in the healthcare system ought regard drugs as only part of a larger competition to provide the best quality medical care. When viewed in this light, it is no longer only the price of a drug that should be considered – but rather the overall health costs caused by a disease. Sometimes, for example, when a supposedly more expensive drug is given to the patient earlier, it ultimately proves cheaper than treating the same patient as long as possible with a cheap, but less effective drug.

Health insurers and manufacturers should take such considerations more seriously into account, and should regulate the delivery conditions of medications via contracts. This way, one can find more savings in health care – with increasing quality of care – than one would find using dirigiste methods such as setting price limits or forced rebates, that would only serve to unnecessarily weaken the global development of a future healthcare economy market in Germany.

It should also be pointed out that, during the last two years of economic turmoil, research-based pharmaceutical companies were an anchor of stability for Germany. They have maintained a steady workforce, and have brought investment to Germany. Health policymakers should therefore not decide to belatedly put a German industry of the future into crisis.