In some African countries, hospitals live in constant fear that they are being supplied with fake medicines. If this remains unnoticed, patients are at risk. However, if it is recognized, those who have exposed the fake are at risk. After all, people who falsify medicines or sell such medicines with intent have no respect for human life. This is why an alarm network in which church-affiliated hospitals in 11 African countries give each other warnings of falsified products, never publish the hospital where the fake was detected. This was reported by Dr. Gisela Schneider, Director of the German Institute for Medical Mission (DIFAEM) at the workshop “Falsified and Sub-Standard Medicine – Initiatives and Activities to Secure Access to High Quality Medicines“ at the World Health Summit, a meeting of experts on global health which took place in Berlin from October 14 - 16. The workshop was hosted by vfa. Over 100 visitors attended the summit including African health ministers and doctors, health consultants, representatives of health organizations and companies. 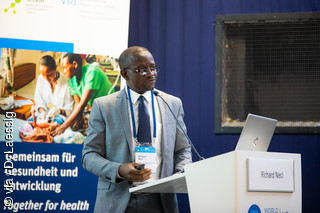 Diana Lee who works for the World Health Organization (WHO) now knows that besides falsified medicines and sub-standard medicines (approved but poorly manufactured) there is also the phenomenon of medicines that – without simulating a specific medicine – falsely claim to be approved drugs. An example of this is “Femalegra”, an alleged impotency cure for women.

The WHO estimates that on average around ten percent of all medicines traded in emerging and developing countries are fake or not approved or have quality defects; in some countries it is a great deal more than this. However, falsified medicines are also not unknown in the regular distribution channels in the developed countries. 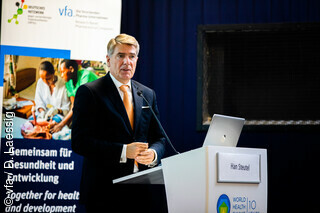 The vfa President Han Steutel reported how manufacturers, wholesalers and pharmacists in Europe are currently working together to set up a defense system against falsified medicines. Talking about these distribution channels, vfa President Han Steutel was able to report constructive cooperation among all those involved in the distribution system. In the EU, the pharmaceutical industry is working with wholesalers and pharmacists on a defense system which should make it impossible in the future to smuggle fake medicines unnoticed into legal distribution channels. The system has a legal basis but here the EU has placed the organization completely in the hands of the actual stakeholders for the first time rather than developing a system itself. The stakeholders must now prove that this was the right decision. Steutel was confident, however, that particularly for the German part of the system – called securPharm – the still outstanding implementation issues would be finalized by 9 February 2019 when the system is scheduled to go live.

The envisaged EU system is based in particular on two safety features, explained Dr. Stefan Artlich from the company Bayer: an anti-tampering device and unique pack identifiers. The latter feature will be fed into a protected EU-wide database system with whose help every pack can be checked again in the pharmacy before the handover to the patient. The anti-tampering device (known as tamper-evident closure in packaging technology) is aimed at making any manipulation of the content of a pharmaceutical pack visible.

In the concluding discussion, it became clear that the upcoming EU system to combat falsified medicines would not work in its existing form in emerging countries in the foreseeable future. Countries and regions will have to develop defense mechanisms tailored to their own situations instead. However, as Han Steutel emphasized, cooperation is the key to combating falsified and sub-standard medicines.