Germany as a location for pharmaceutical research and development 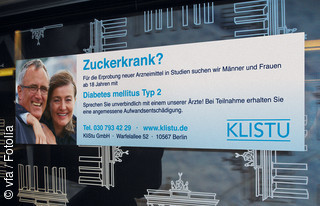 Advertisement for a clinical trial in a German subway.Seventeen out of forty-two member companies of the vfa (German Association of Research-Based Pharmaceutical Companies) are currently running laboratories to research active ingredients or galenics in Germany. They include companies with headquarters in Germany, USA, France, UK, Japan and Switzerland. Thirty-one member companies coordinate, from their German offices, their clinical studies in Germany and, at times, also in other countries. Every year they spend around 6.2 billion euros on research and development (R&D) in Germany alone, equaling a daily spending rate of 15 million euros. This shows that for internationally active pharmaceutical companies Germany is one of the leading research locations.

In their laboratories in Germany, research-based pharmaceutical companies focus mainly on the following diseases and fields of work:

In addition, infectious, respiratory and gynecological disorders play an important role. New antibiotics too are being developed in Germany.

Companies are working on new therapeutic approaches and develop the active ingredients needed to implement them. The laboratories in Germany are known for new chemical-synthetic as well as recombinant active compounds. Especially in the latter field, Germany has made great strides since the turn of the century so that, currently, the country is one of the worldwide leading sites for manufacturing biopharmaceuticals. Based on a 2016 count, Germany has a total of 365 companies whose range of services include medical biotechnology; among them are many small firms. 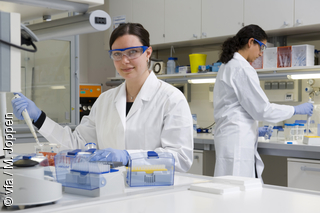 Researchers in an industrial lab in Germany 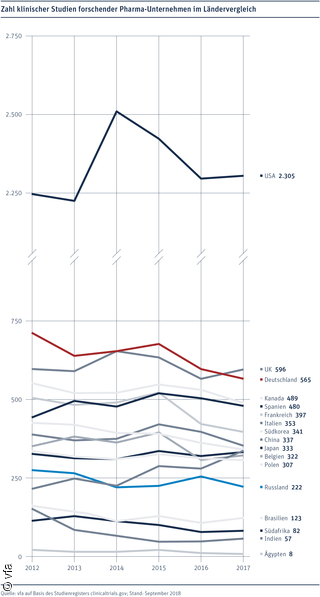 Participation of countries in industry-sponsored clinical trials registered in the database clinicaltrials.govFor industry-sponsored clinical trials Germany has become the second most important country worldwide after the US: No other country takes part in more trials (see attached diagram, which can also be downloaded as a pdf file). This is ultimately due to the reliable and transparent approval processes and the high level of accuracy achieved at German trial sites e.g. in the gathering of data.

Other countries that show a great involvement in industry-initiated clinical studies are, among others, the UK, France and Canada whilst, in comparison, Indian and Brazilian clinics are only engaged in a few studies of this kind, and South Africa generally only conducts studies required for the licensing of generic drugs. Most industry-initiated studies are performed on a multinational basis and the same standards must be adhered to in all countries that take part.

Although the situation in Germany as far as studies are concerned is very positive in many ways, there are also some drawbacks. In 2014 for example, companies conducting studies that required a higher than normal level of X-ray or PET diagnostics had to wait up to 13 months to obtain a separate license. Even if the licensing periods have become shorter in 2015, a reliable, deadline-based licensing procedure is urgently required because, in view of current conditions, many companies have given up offering German clinics and practices the chance to participate in these studies. They would interpret an introduction of set licensing periods as a signal that they can, once again, count on German medical facilities. A return of such studies to Germany would ultimately also benefit the patients: On the one hand it would give them an opportunity to take part in a study prior to the drug in question being licensed and, on the other hand, following licensing, because it takes longer for new treatment options developed without German involvement to become part of everyday treatments available in German practices.

Pros and cons for Germany as a research location

For many vfa member companies, one important advantage of their German research sites is the highly qualified, motivated and responsible staff. This applies to laboratory-based scientists, clinical developers, managers and engineers as well as laboratory assistants and animal keepers. In 2016, approximately 16,400 employees worked in R&D – one fifth of their overall staff. 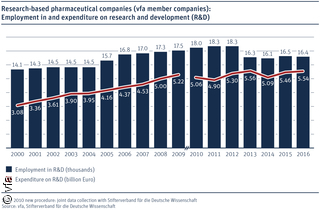 The diagram can also be downloaded as a pdf file.

Another advantage is the dense network of good to excellent universities and faculties, a multiplicity of non-university research facilities such as the Max-Planck, Leibniz and Fraunhofer Institutes, the Helmholtz Centers and the very many biotech startups. Furthermore, the so-called “Kompetenznetze in der Medizin (“competence networks in medicine”) link doctors across various facilities that do research on the same illnesses (such as sepsis or cancer in children). In recent years, six German centers specializing on health research and two research networks have been founded whose purpose is to find new preventative and therapeutic options for widespread diseases.

On the other hand, countries such as the US, France and Switzerland have more or similarly high pharmaceutical R&D capacities as Germany, and new competitors conducting pharmaceutical research such as China, Singapore and, to a lesser extent, India, have come along.

A variety of factors determine where R&D facilities are extended or new ones established. Apart from a good infrastructure, it is excellent cooperation partners such as universities or other research facilities, highly qualified staff and flexible labor laws that count. What matters too is the speedy processing by the regulators of applications such as those necessary for animal testing, clinical studies, marketing authorizations and new research and production sites. Furthermore, the acceptance of medical research and innovative drugs by politicians and the general public plays an important part. In some of these fields countries such as the US and Singapore do much better than Germany.

Cooperation between pharmaceutical companies and leading scientists undertaking fundamental research requires particular attention. Over the last few years, Germany has, up to a point, caught up with the USA and Great Britain where such cooperative efforts have long been part of everyday research. These days in Germany such activities have become common practice in a series of research and biotech clusters with a medical focus.

In view of the competition for research sites, the Federal Research Ministry in Germany (BMBF) has introduced various initiatives such as the “Health in a society of longevity” program. It also promoted the topics of prevention and individualized medicine (another term for personalized medicine) as part of its ”Hightech strategy”. Furthermore, the European Innovative Medicines Initiative (IMI), which is funded in equal parts by the EU and the pharmaceutical industry, benefits the pharmaceutical research in Germany. As long as such initiatives are not undermined by legislative measures that make it difficult for new drugs to be launched in the marketplace, they could further improve the competitiveness of Germany as a site for R&D as would research funding through fiscal incentives which have long been common practice in many European and global competitors of Germany – but, unfortunately not in Germany. 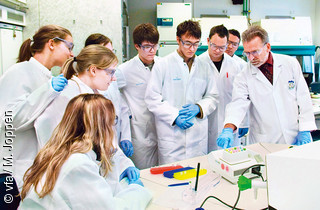 A group of students gets an introduction to drug research at the German labs of a research-based pharmaceutical company.

By investing a great deal of money and creating new jobs research-based pharmaceutical and biotechnology companies have, time and again, shown that they believe in Germany. In a globalized world where research locations compete against each other and where, in particular in Asia, new competitors have joined the race, this is only possible if innovation-friendly general conditions prevail that these companies can count on in the long run. One of these is fair reimbursement for innovative drugs.

An exodus of research scientists and developers or a withdrawal to only certain sections of the development chain for drugs would, particularly for Germany, a country that is poor in raw materials, mean a considerable loss of economic power, a loss of competitiveness and, last but not least, a loss of identity. After all, it is German laboratories that have, in the past, produced leading active ingredients such as the ASS and paracetamol painkillers, much-used blood pressure lowering drugs such as ramipril, amlodipin, and telmisartan, vital medicines to treat COPD like tiotropium bromide, important antibiotics such as cefotaxim and ciprofloxacin or the HIV agent nevirapine – the first medicine to protect children from being infected by their mothers during birth. Several insulin products for diabetics and innovative substances for the prevention of strokes are also the result of research conducted in Germany as some antibodies for the treatment of cancer. Significant contributions have also been made by German industrial laboratories to two widely used recombinant anti-rheumatic drugs.

Innovations such as these have boosted medical progress in Germany as well as in other countries time and again. The vfa does everything it can to ensure that Germany can further increase its importance in this field. 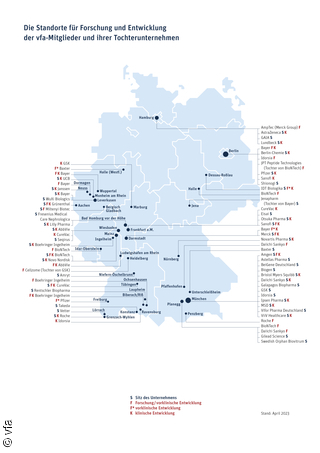 The map can be downloaded as PDF here.