With the goal of ensuring that countries have expeditious access to COVID-19 vaccines regardless of their purchasing power, the World Health Organization (WHO) has launched the COVAX initiative and its COVAX Facility. COVAX stands for „Covid-19 Vaccines Global Access“.

The COVAX Facility's mission is to accelerate vaccine development and production. Most importantly, it is responsible for purchasing vaccine doses from manufacturers and allocating them to all states that have declared their participation in COVAX.

In our latest #vfaTonspur podcast edition, radio journalist Philipp Eins asks vfa Managing Director Research Dr. Siegfried Throm about European vaccine procurement: Is lifting patents the solution for more vaccines? How can they be distributed fairly worldwide? And what role does the so-called COVAX facility play in this?

vfa soundtrack. From research, business and politics - Coronavirus pandemic: How protective vaccinations are coming to Germany and the world

By the end of 2021, at least two billion quality-assured and need-based vaccine doses should be ready to end the acute phase of the pandemic, according to COVAX's stated goal. Poorer countries are to receive at least 1.8 billion of these vaccine doses (of which 1.3 billion will be free) to protect about 27 percent of their populations in 2021. The idea behind this is solidarity and the conviction that, in a closely interconnected world, the Covid 19 pandemic can only be contained if all regions are adequately protected.

Access to vaccination must be possible and affordable for all countries» 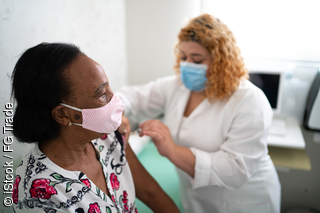 The COVAX Facility is operated by the World Health Organization (WHO) together with the private-public vaccine alliances Gavi (Global Alliance for Vaccines and Immunizations, lead) and CEPI (Coalition for Epidemic Preparedness Innovations). As a "vaccine pillar," COVAX and COVAX Facility are part of the umbrella organization Access to COVID-19 tools (ACT). ACT is also responsible for diagnostics, medicines, and health systems strengthening.

There are now 190 countries participating in COVAX out of a total of about 200 countries worldwide, including 98 wealthier countries and 92 low- and middle-income countries.

When wealthier nations purchase vaccines through the COVAX Facility, they pay the full price negotiated with vaccine manufacturers. Poorer countries are asked to contribute financially, but if they cannot, they are entitled to free supplies. Many wealthier countries choose not to be supplied by COVAX. However, they support procurement for poorer countries financially or donate purchased quotas. There are also an increasing number of countries that announce that they will later donate surplus vaccine doses from the stocks they have purchased.

When wealthier nations purchase vaccines through the COVAX Facility, they pay the full price negotiated with vaccine manufacturers. Poorer countries are asked to contribute financially, but if they are unable to do so, they are entitled to free supplies. Many wealthier countries choose not to be supplied by COVAX. However, they support procurement for poorer countries financially or donate purchased quotas. There are also an increasing number of countries that announce they will later donate surplus vaccine doses from the stocks they purchase.

The European Union announced at the G7 digital summit on Feb. 19, 2021, that it would increase its support for the COVAX Facility to 1 billion euros, after initially pledging 500 million euros. It sees this as an act of global solidarity and a complement to its bilateral agreements with vaccine manufacturers to supply its own population, for which €2.7 billion has been reserved. Also announced on February 19, Germany is supporting the COVAX Facility with an additional 980 million euros - on top of the high millions already contributed and as part of comprehensive assistance to combat the pandemic.

While China has been a member of the COVAX Facility since October 2020, the USA did not join until after President Joe Biden took office in January 2021. The USA will support COVAX, as Biden announced at the virtual G7 summit, with an expected total of $4 billion in 2021 and 2022.

I thank the United States, Germany, the European Commission, the European Investment Bank, Japan and Canada for their significant funding commitments. Today's news shows us that solidarity is winning.»

To ensure coverage of participating countries, the COVAX Facility has developed different approaches:

Vaccine manufacturers collaborating with the COVAX Facility will be enabled to rapidly and extensively expand their production capacity through upfront purchase commitments and upfront payments. To this end, the COVAX Facility aims to provide $5.7 billion. The pre-purchase commitments will specify supply volumes, delivery dates and prices, with the COVAX Facility seeking to negotiate prices that are at most on par with bilateral supply contracts with individual countries. How vaccine supplies are allocated to participating countries and are to be used is to be governed by WHO guidelines.

In an agreement published together with the Bill & Melinda Gates Foundation on Sept. 30, 2020, 16 leading pharmaceutical companies pledge to support global initiatives such as COVAX and to offer their innovations worldwide at affordable prices.

At the turn of 2020/2021, COVAX has contractually secured access to at least two billion vaccine doses. This is to enable all participating and adequately prepared countries to vaccinate health workers and vulnerable populations in the first half of the year. Most agreements guarantee COVAX a share of the initial production batches and further supplies as production progresses. Global allocation is scheduled to begin in the first quarter of 2021.

Let's not kid ourselves: The question of who in the world gets which vaccine and when will of course also create new bonds and new memories; because those who receive help in such an emergency naturally remember it much more strongly than would be the case in good times.»

The advised two billion doses of vaccine refer to agreements between COVAX and the following manufacturers, among others:


In addition, COVAX has secured a right of first refusal on additional doses of vaccine. It comes into effect when vaccines whose development is currently supported with COVAX funds receive regulatory approval.

To help member countries prepare, COVAX released an initial supply forecast on January 20, 2021. With numerous caveats (actual vaccine availability, sufficient funding, country readiness, etc.), it announces close to 2.3 billion doses of vaccine for global distribution in 2021. The first vaccines available will be those from AstraZeneca/Oxford and Pfizer-BioNTech, the forecast says, with Novavax and Johnson & Johnson vaccines expected to be added from April 2021. The forecast assumes a steadily increasing supply of vaccines. Because the supply volume is based on the population size of participating countries, about half of the announced vaccine doses are expected to go to Southeast Asia and Africa.

In an initial update dated Feb. 3, 2021, COVAX published a country-by-country distribution plan for the 337 million doses of vaccine expected in the first half of 2021. If all goes according to plan, 1.2 million doses of Pfizer/BioNTech's vaccine will be ready to start as early as the first quarter of 2021, the document states. Within the first half of 2021, another 240 million doses of the AstraZeneca/Oxford vaccine from the Serum Institute of India will be ready for distribution, according to the document, supplemented by 96 million doses from AstraZeneca's own production. During 2021, COVAX expects to receive additional substantial shipments from these contractors under existing agreements. The doses of vaccine expected to be available in the first half of 2021 will enable an average of 3.3% of the total population to be protected, primarily the most vulnerable groups in 145 participating countries, COVAX predicted.

"The fact that the first vaccines are now available is a ray of hope," Tedros Adhanom Ghebreyesus, WHO director-general, was quoted as saying in a press release issued by COVAX on Dec. 18, 2020. "We will only truly end the pandemic if we end it everywhere at the same time. And the only way to do that is to vaccinate some people in all countries, rather than vaccinate all people in some countries."